Our Yr 13's produced a brilliant range of styles and genres in their scripted pieces this year. They all excelled with a lot of hard work and extra time given to perfecting their performances and this paid off with flawless performances on exam day.

The Memory of Water by Sheilagh Stevenson

This beautifully crafted play is a masterpiece of family foibles with characters and dialogue that everyone can recognise and relate to. Catherine, Mary and Teresa are all gathered at their mother’s house following her death to sort her possessions, which exposes the weaknesses in the siblings' relationships and leads to scathing bickering and poignant reminiscing about their childhoods. This piece needs precision and expert timing in order to be effective and this was demonstrated brilliantly by Abi Sirrell as the obsessive neurotic Teresa, Melissa Dent the cynically sparky Mary and the self obsessed and hilarious Philipa Daniels bringing these characters to life with exceptional comic timing and brilliant embodiment of characters creating a fast-paced and entertaining piece. 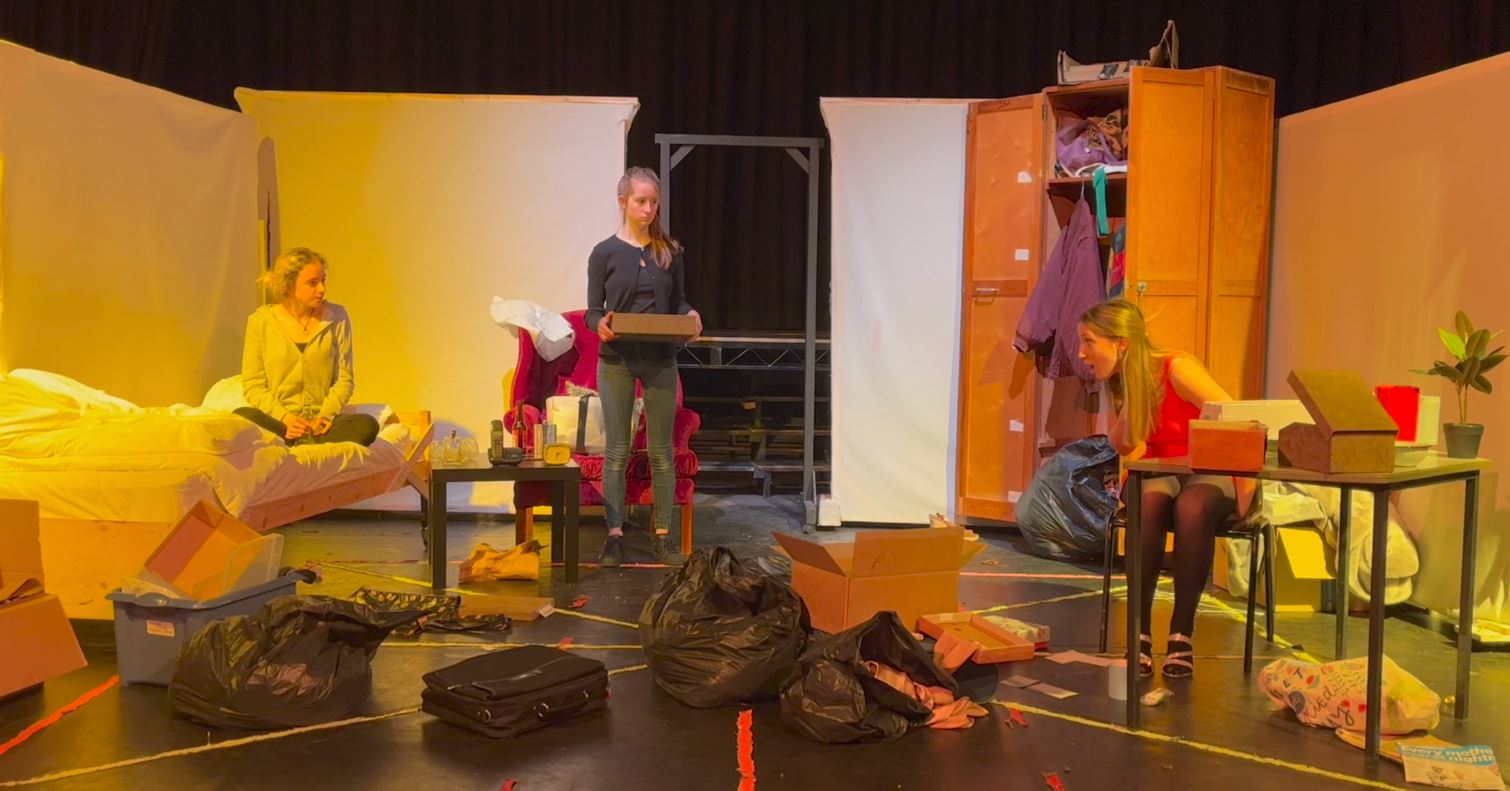 The Last of the Pelican Daughters by The Wardrobe Ensemble

This play adapted in collaboration with the iconic practitioner Complicite cleverly navigated time and political concepts using the forum of the Pelican daughters in their deceased mother Rosemary’s house celebrating her Birthday after her recent death. The daughters could not be more different but their differences are what make this play exciting and engaging full of conflict and emotion which was demonstrated brilliantly by this all female cast. Izzy Neil’s maternal & conservative Joy was poised to perfection whilst the boisterous and comical Sage was a perfect match for Charlotte Stacey-Stonehouse’s comical character. Mia Titterton gave an acting masterclass in the role of spiritual Maya with Emily Cartwright tackling the conflicted and tragic figure of Storm Pelican with stunning emotion giving the piece a cathartic and pensive mood throughout. 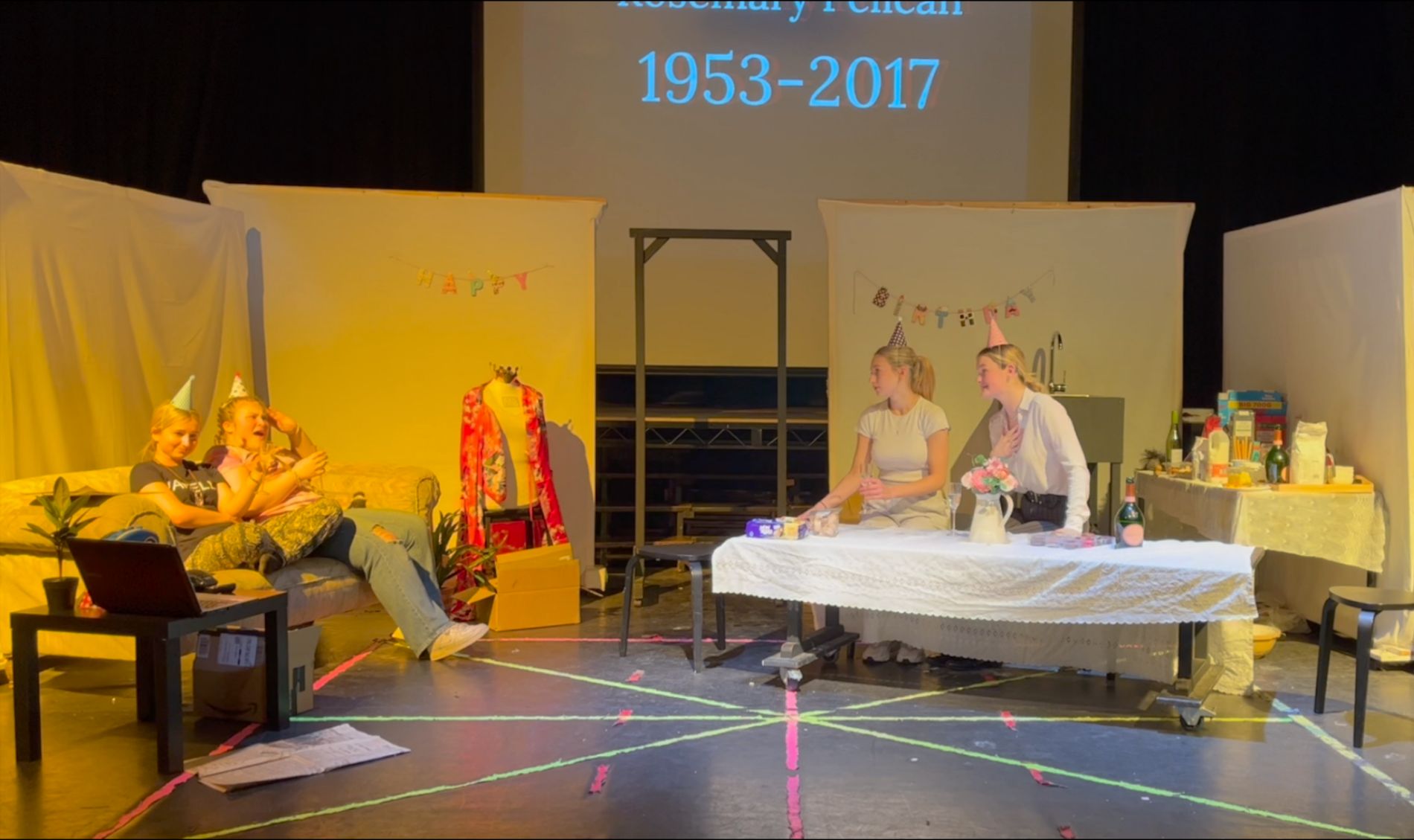 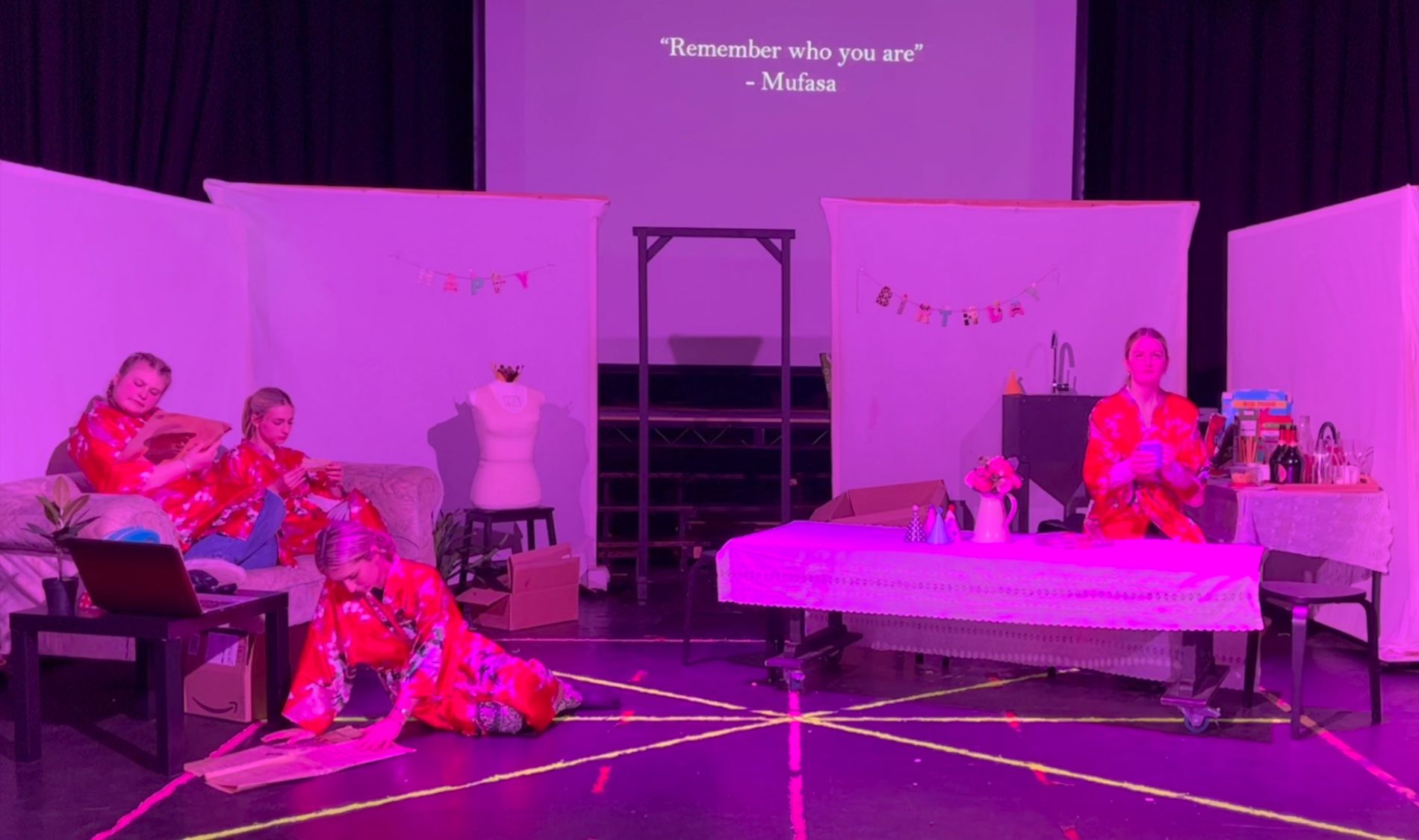 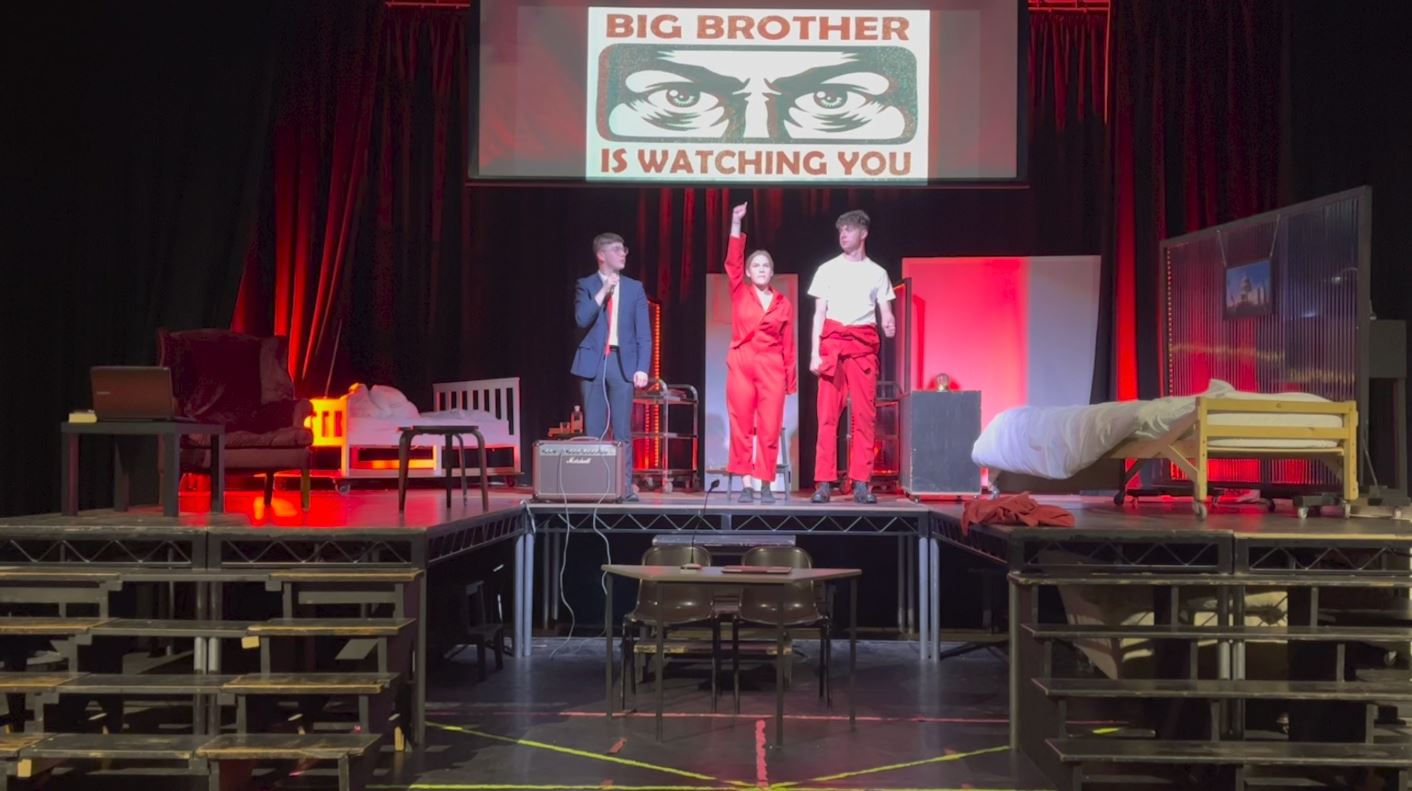 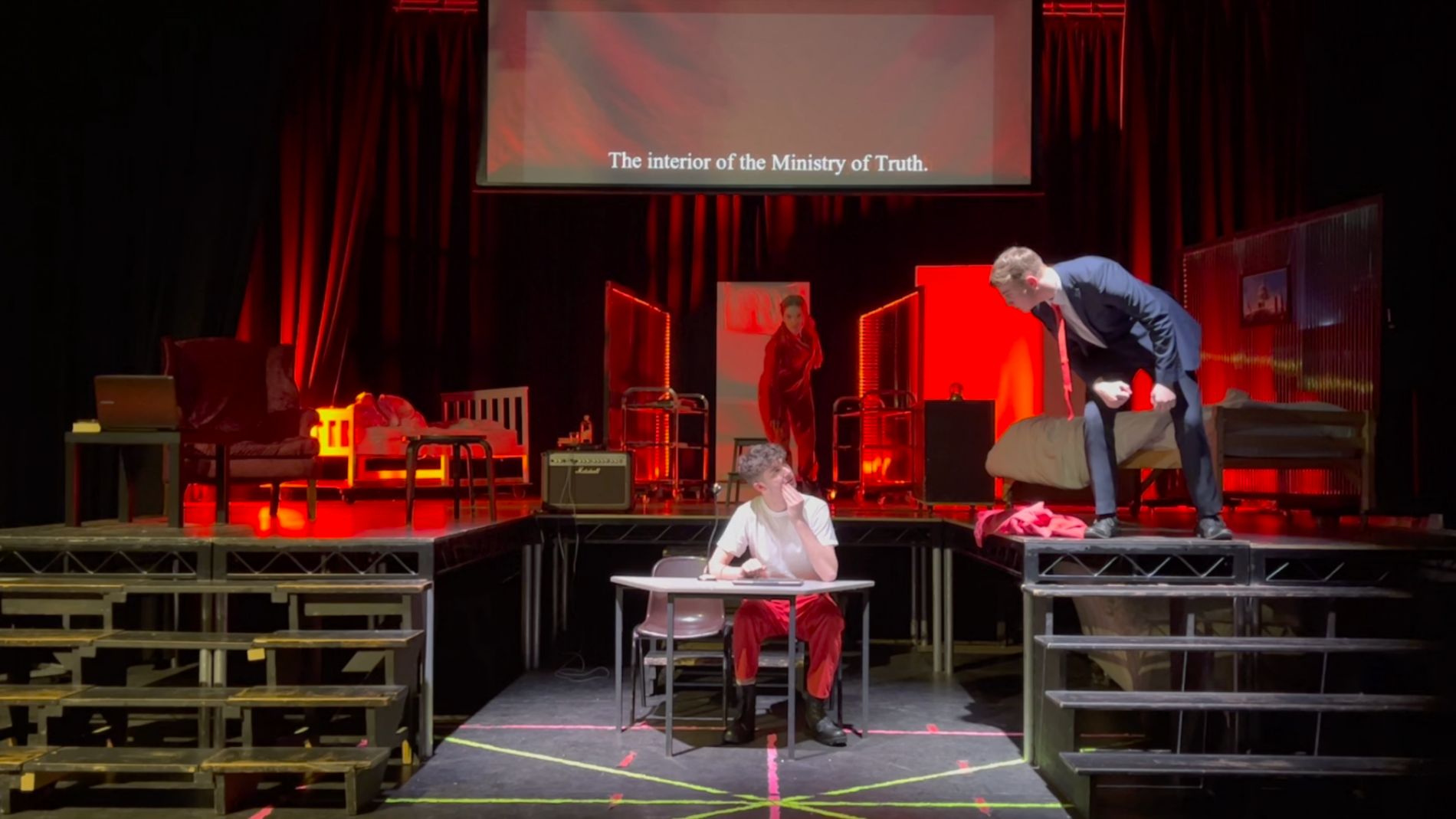 Orwell’s clever dystopian text has been brilliantly adapted by Robert Ike and Matthew Dunster into a fast paced and eerily surreal play text. The small but perfectly formed cast of 3 truncated this narrative into a fast and unnerving performance inspired by the company Headlong and channelling their use of multimedia and complex sound and lighting to compliment the intriguing world and famous tale of Winston Smith and Big Brother. Rebecca Cutler’s rebellious and free spirited Julie brilliantly built tension with Chris Cook’s tormented Winston giving an acting masterclass especially in the torture scene. Winston’s nemesis O’Brian was given eerie precision and exceptional stage presence by James Moore. All of these varying characters made for an engaging and emotive performance.

Macmillan’s script explores the confusingly disjointed world of Sarah, a drug addict, as she tries to narrate her way through the rehabilitation process. Based in an enclosed all white box world, the set for this piece provided the perfect blank slate to demonstrate the key protagonist’s reluctant attempt at detoxification. Trinity Waldron played Sarah brilliantly full of nervous energy and angst. The rest of the cast multi-roling showing a range of characters well with Maisie Leake’s mad ramblings as addict Paul contrasted brilliantly with the calm and calculated demeanour of Inci Aikin’s Therapist figure. Theo Burt’s tormented Mark provided the perfect antagonist to the clinic atmosphere whilst Ciaran Barry’s matter of fact Doctor figure was an effective foil to Sarah. Clean and creative ensemble work, inspired by the work of Headlong Theatre Company, was accompanied by the eclectic tones of David Bowie album. Overall the impact was engaging and thought provoking. 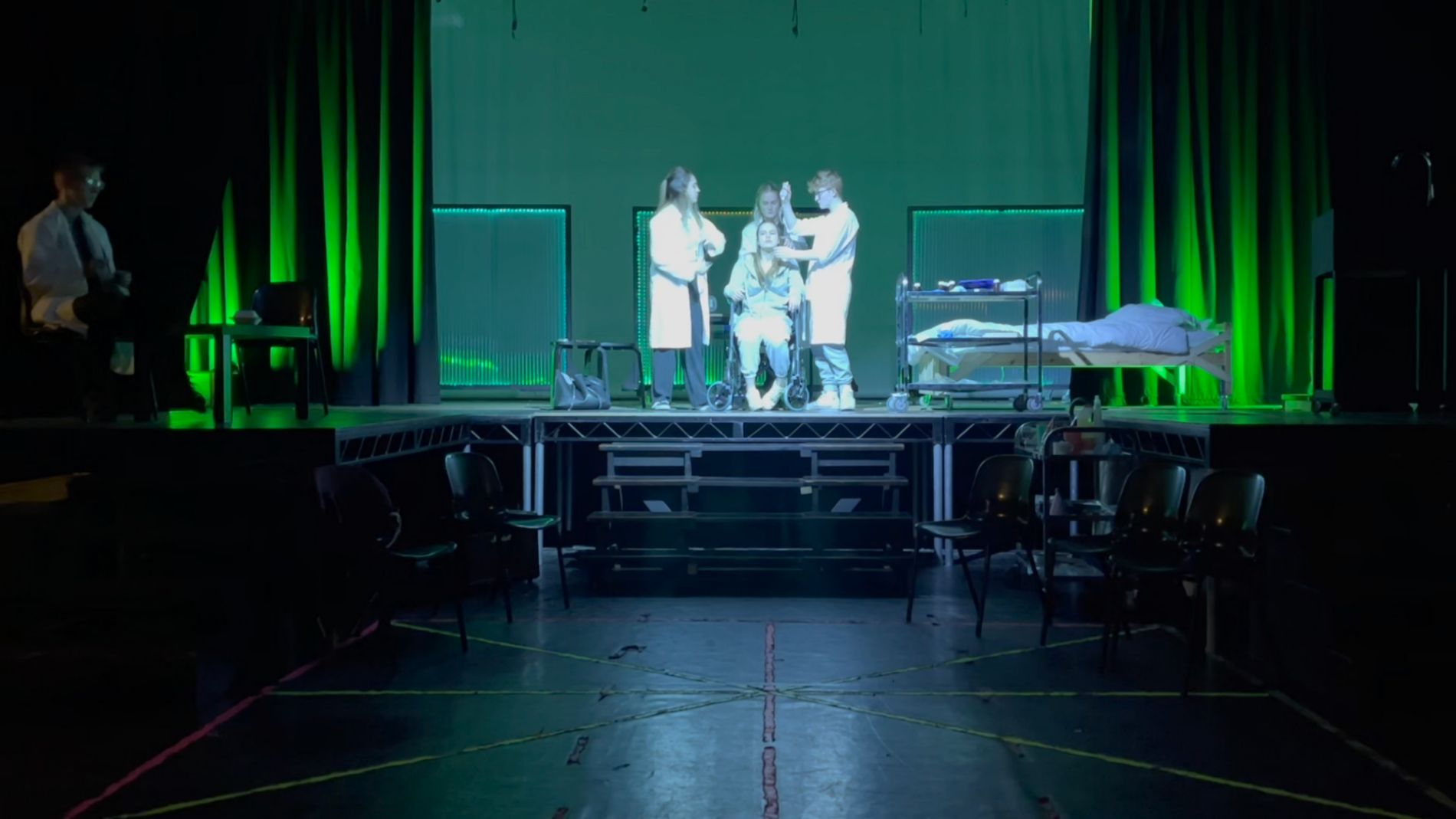 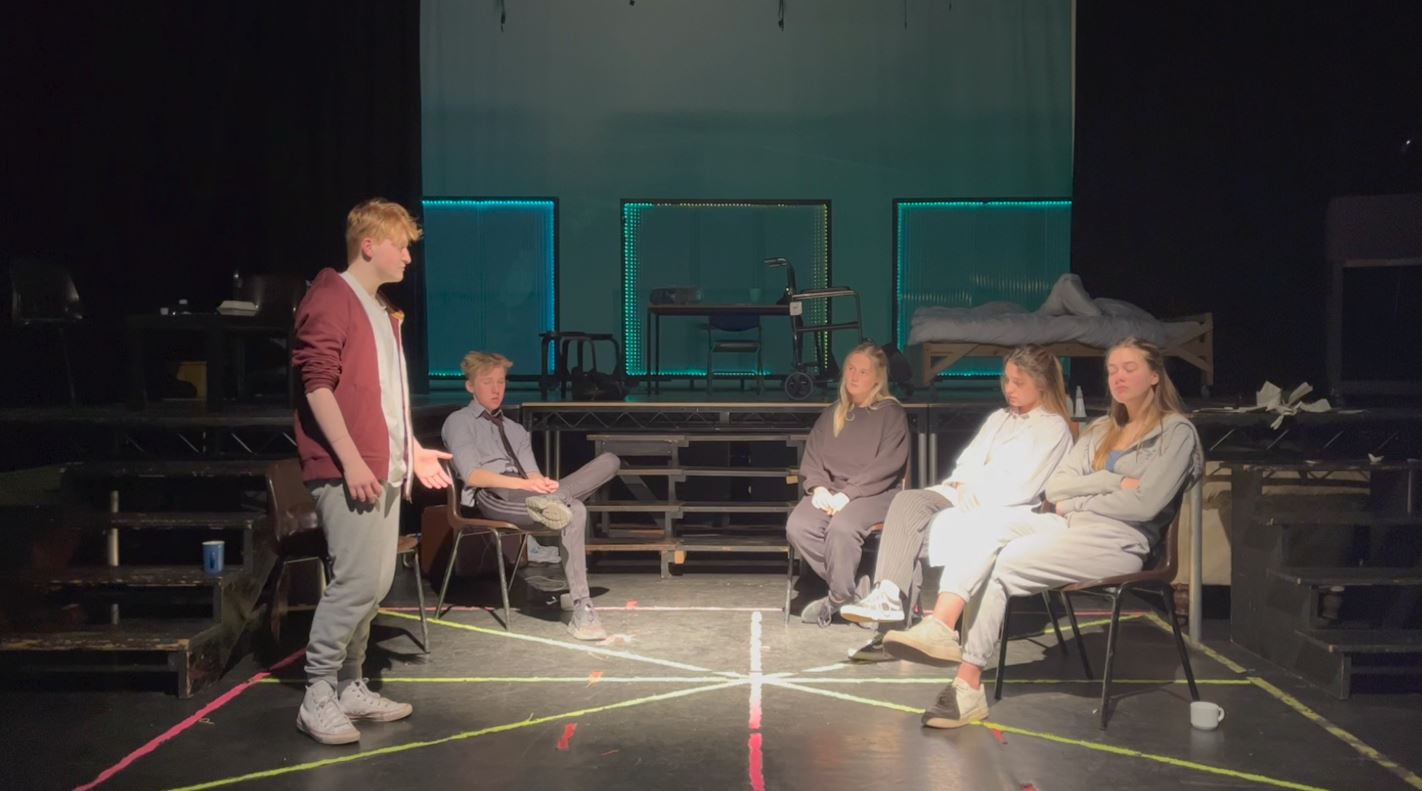 How To Disappear Completely and Never be Found by Fin Kennedy 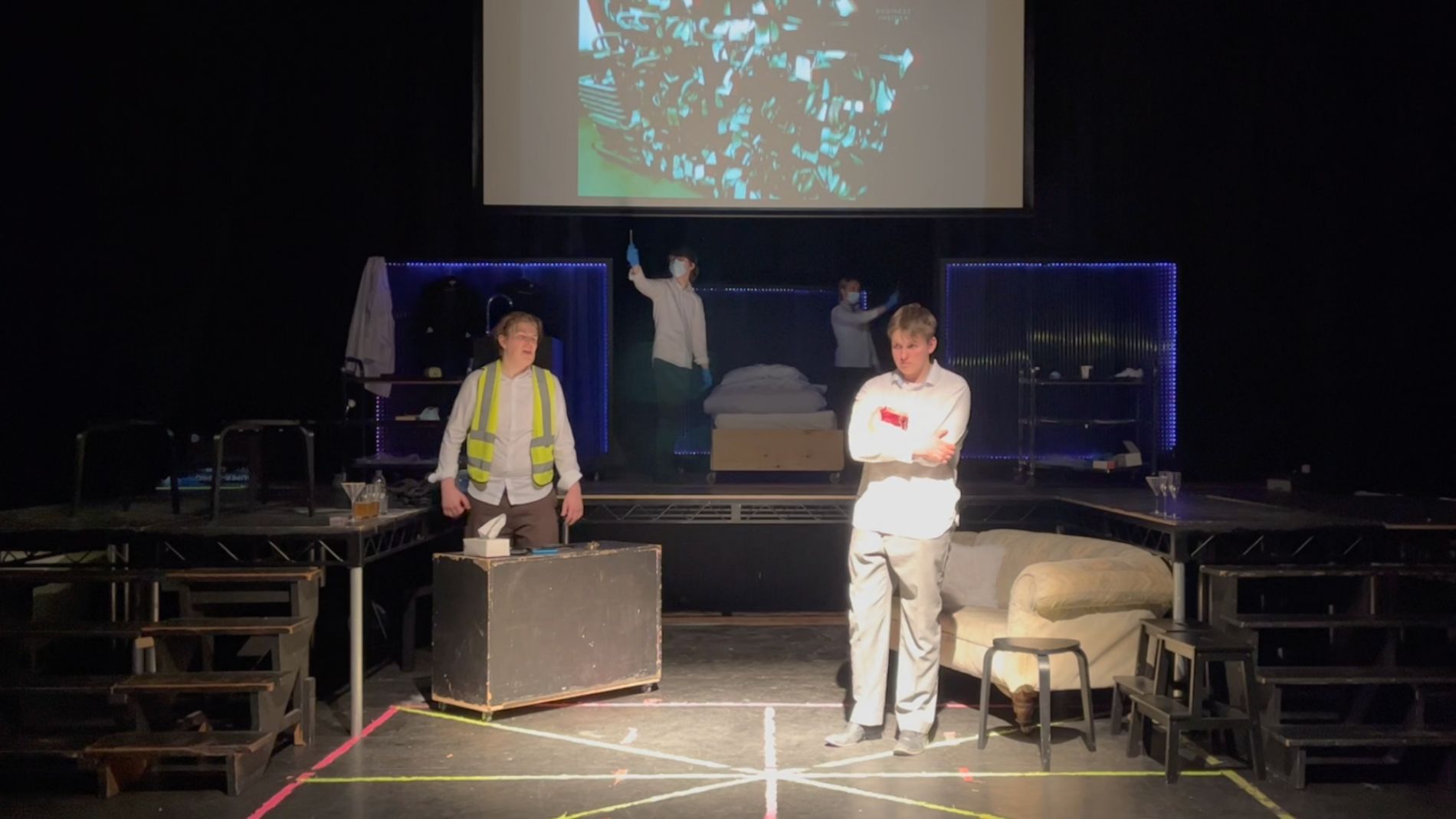 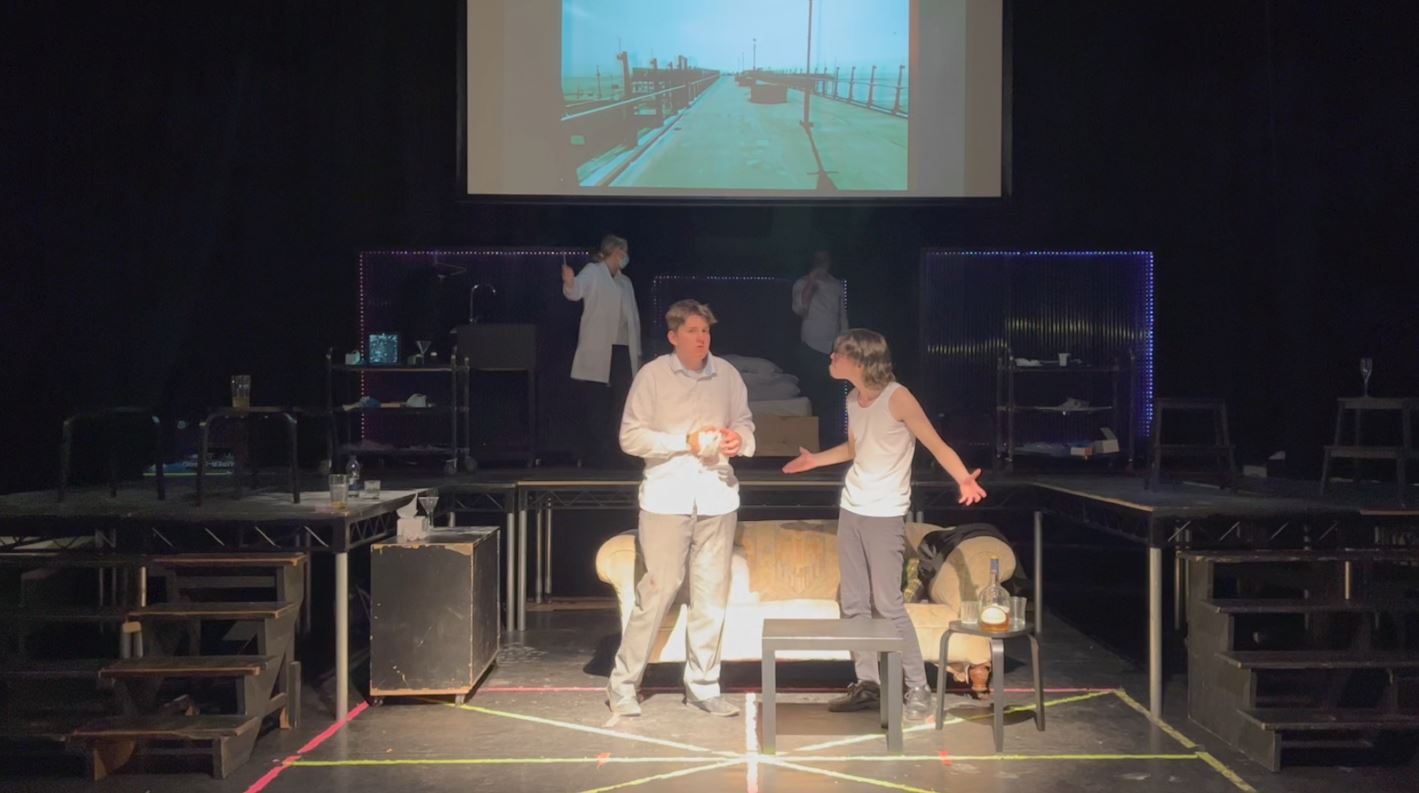 This abstract and darkly comical script is a complex play that requires proficient multi-roling and clever ensemble work. However this was not a problem for the very talented and adaptable cast. Finn Bos’ troubled protagonist Charlie demonstrated a gripping downfall with Pat Ross as his comical foil Tube Man. Milly Cavill varied roles effectively between the business like Sophie to the heightened caricature like American Client. Joe Biddle channelled Del Boy brilliance in his interpretation of Charlie’s uncle Mike who has had many personas and guides him on his journey to escaping his identity. The brilliant acting was complimented by layered technology channelling the practitioner Complicite and taking the audience on an intriguing and eclectic journey through the afterlife…or is it?

The Trail by Steven Berkoff

Berkoff is a practitioner that is not taken on lightly, it takes a group of dedicated and very quirky dramatists to tackle it. This year saw such a group and they did the stylised practitioner justice with their interpretation of “The Trial” (adapted from the novel by Kafka). A simplistic monochrome set and costumes meant that the physical theatre, mastered by the group, was the main focus of the performance. Gideon Coleman’s quirky and energetic K was perfectly complemented by the bold and intimidating physicality of Jake Macarthy as the Inspector antagonist. Chloe Parish and Anna Banks created excellent comedy with their double act of the Guards as well as showing range with their interpretations of ‘Doll like’ Lenni and the feeble and grotesque Huld respectfully. Overall the piece was a fast paced, preened to perfection and did AGS proud. 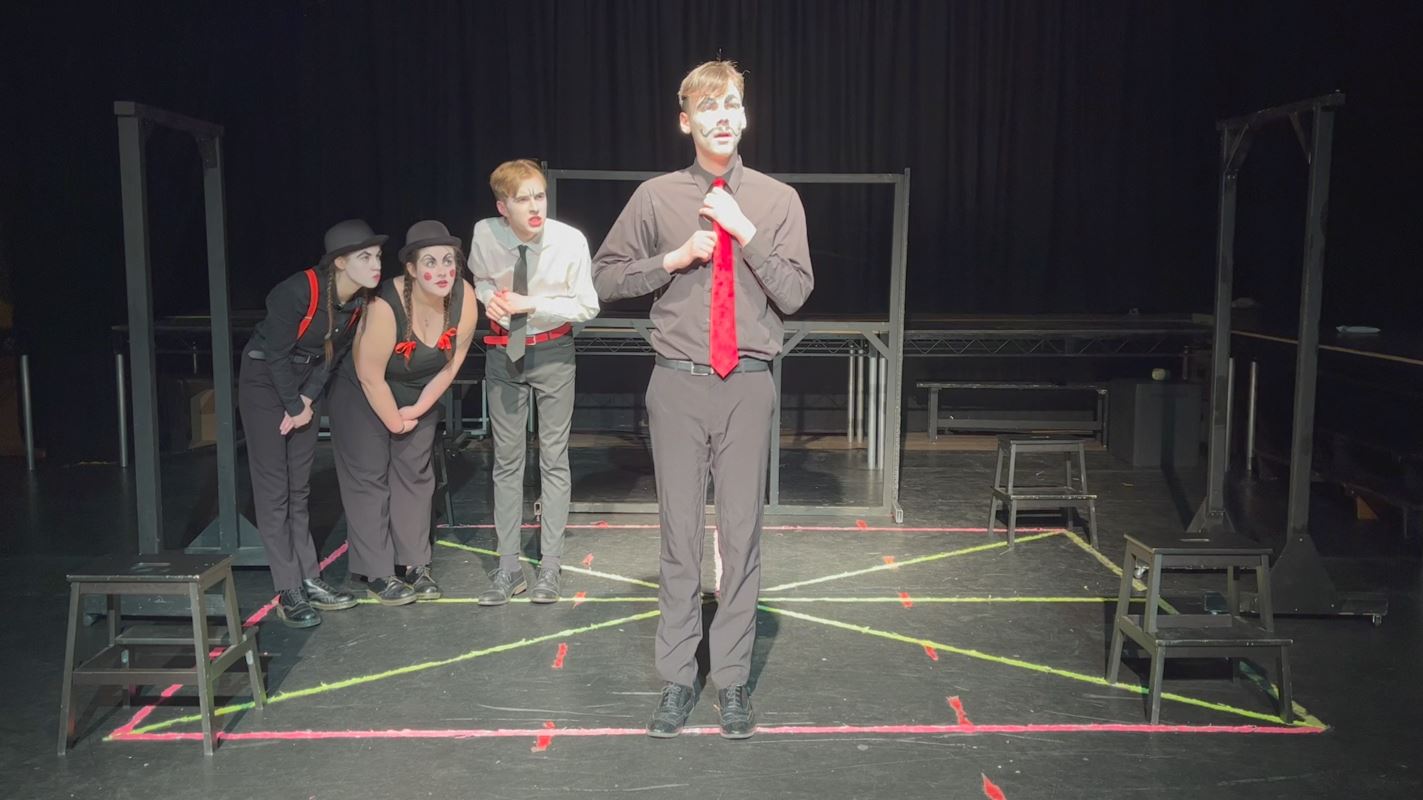 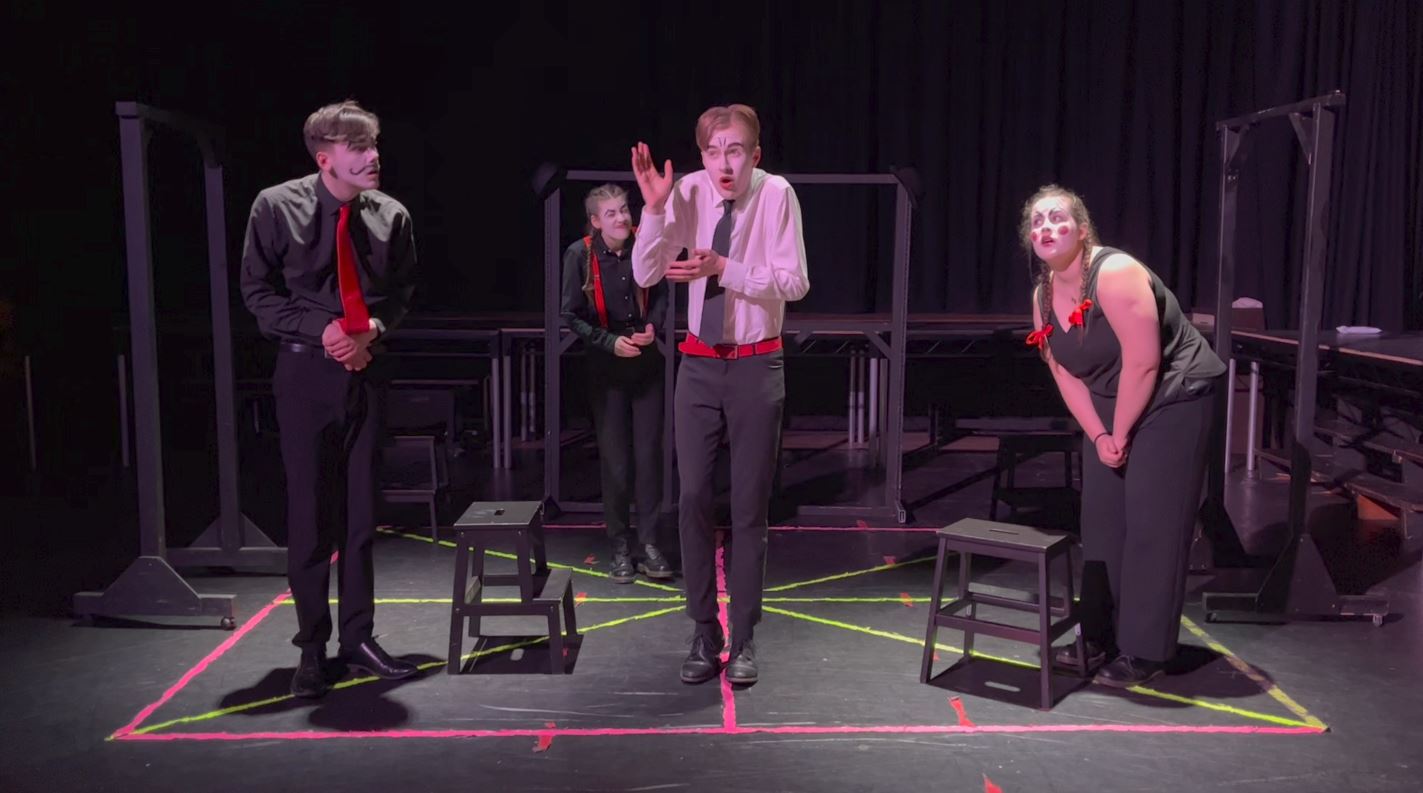 The Devil’s Charter by Barnabe Barnes

This Jacobean tragedy was the brainchild of the performer Jess Clews, boldling taking on a monologue for A Level scripted performance. Lucritian is a Borgias the Italian religious elite and in true Jacobean style has murdered her husband in revenge for her lack or freedom. However her merriment is short lived as in this beautiful monologue she readies herself to dine with Cardinals not knowing that the Pope has poisoned the make up she is applying in order to avenge the murder. Jess Clews captured the character in a brilliantly unique manner adding a dark comical irony to the tragic text and filling the performance with flirtatious charm. It was a beautifully prepared and presented piece. 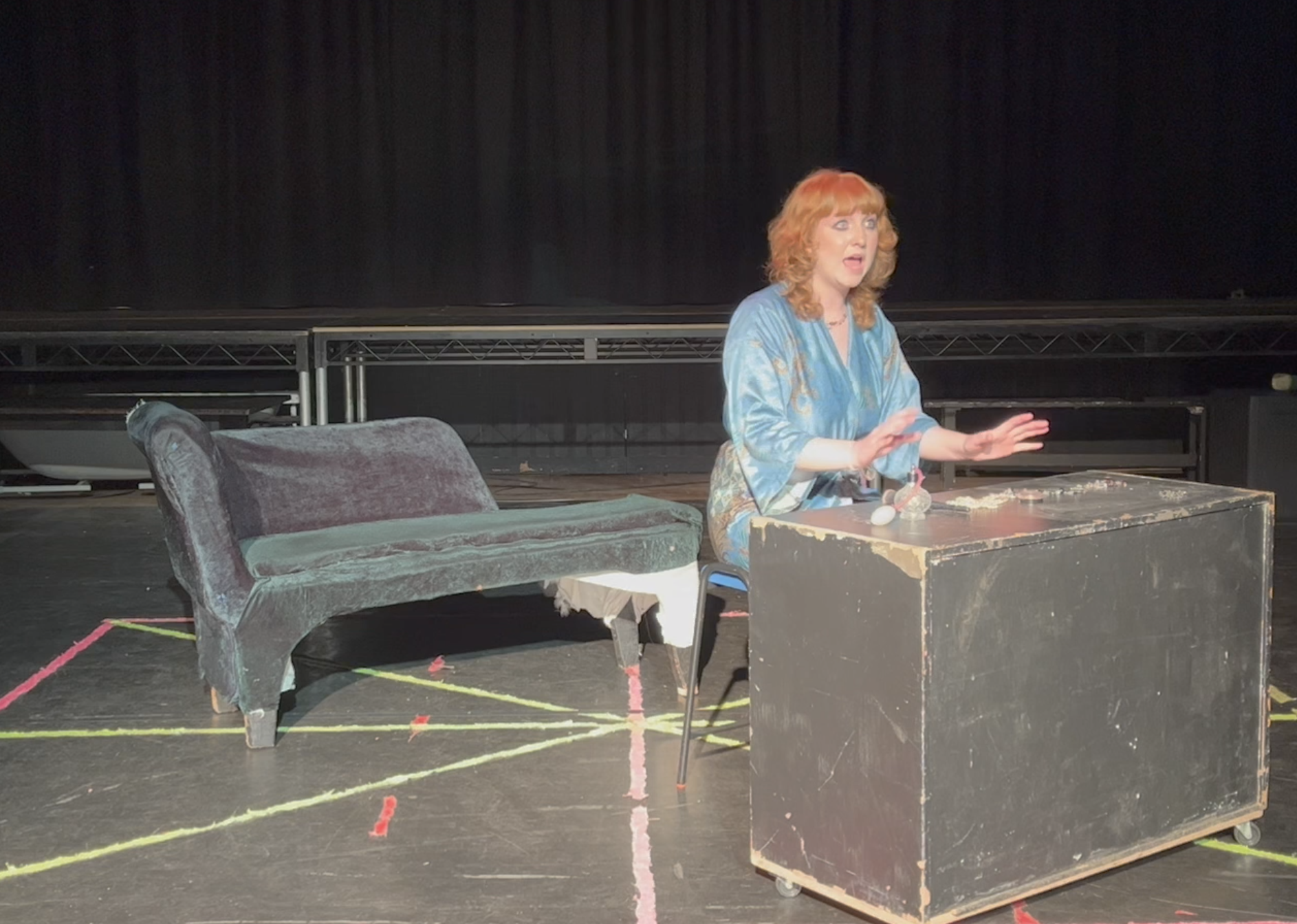 Congratulations to you all, and thank you for your years of Drama hard work and dedication, you will be very much missed.